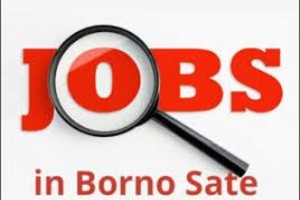 For the average Nigerian job seeker, in their poise in the course of searching for jobs in Nigeria, the northern part of the nation is the last place on their mind that they can ever think of getting a job in Nigeria. Places like Maiduguri, Borno, Zamfara and a host of others are regarded as dead zone to many other people. I once remembered a friend of mine who secured an admission in one of the Northern universities right after we left the secondary but then his parents had to out rightly decline the offer. That is how bad it is. This is majorly caused as a result of the various cases of insecurities in the Northern part of the Nation. Over the years ever since the start of the Boko Haram insurgency in the North which has led to the death and destructions of over a thousand lives and properties in the area and as a result of this the growth and development of the area has been hindered as many people including astute business owners and investors have neglected the area for security stable communities.

Maiduguri is one of the areas which is always avoided by not only job seekers but others in terms of investment and entrepreneur. Maiduguri is the capital and the largest city of Borno State in the North-Eastern Nigeria. Maiduguri was founded in 1907 as a military outpost by the British and has since grown rapidly with a population exceeding a million by 2007. It is a state which according to the 2006 national population census has about Five hundred and forty-three thousand and Sixteen hundred, a figure which by now would have reduced if we are to judge by the loss of lives experienced in the state and the instability in the area which has also made several people leave the city, migrating to other cities in Nigeria.

When it comes to economy, Maiduguri also is the principal trading hub for North-eastern Nigeria. Its economy is largely based on services and trade with a small share of manufacturing.

Maiduguri is home to three markets which include an ultra-modern “Monday market” that has a spectacular satellite image view. A 2009 survey of property markets in Nigeria positioned Maiduguri as the third most expensive for buying and renting in after Abuja and Lagos. The city is close to Chad, Niger and Cameroon, which the bad road caused by the terrorist insurgency has destroyed and made inaccessible because of the various act of kidnapping along those areas.

Firewood gathering is a source of income for newer residents who have been displaced by violence, and the harvest shortfalls resulting from climate change in the region.

With the aforementioned brief introduction about Maiduguri and its history, it can be easily deduced that Maiduguri to many people who might be searching for job opportunities in Nigeria. However it is actually a different story on the other side of the coin as the situation which many thinks have made the place a death zone has also given many others diverse opportunities which has become a source of livelihood to many.

I recalled when about leaving the one of the Northern states where I served, a friend of mine chose to stay back in the North, Maiduguri to be precise, defying the plenty cases of insecurities in the area, now he works with a non-governmental organization in the North.

At this point let me paint the picture well for you to understand, as against searching for jobs in Lagos or Searching for Jobs in Port-Harcourt or any other part of Nigeria, it is much easier to secure jobs in Maiduguri as there are various opportunities in the area waiting for people with the right qualifications to grab them. There are various reasons why there are plenty job opportunities in the area for qualified candidates. These jobs are ordinary but specific jobs in the area and the major factor which is responsible for the increase in the demand for workers in the area is chiefly caused by the fact that the various cases of insurgency in the region has made many of its populace leave the area for other cities, adding to this the effect of the insurgency of its economic, the health of the people and all related has made the state become a focal point for many non-governmental bodies and other international bodies who has waded in to help in their own ways provide support for the war torn state.  The insurgency has left many of its hospitals destroyed while also creating more people who need health or medical intervention, this and many more will be explicitly discussed in this article.

The good thing about many of these works or job is that they come with good and encouraging salary packages with many other work bonus, also it helps the individual by setting them up or opening them for many other opportunities as the area is the meeting point for various international bodies and organizations who are willing and ready to employ you providing that you have the necessary skill set and   right qualifications.

Health– there is a need for several health workers in Maiduguri as there are various non-governmental organizations who are calling for health workers that will work with them. The health situation in the North is on the low as they do not have access to the basic health services; there are inadequate hospitals and other health facilities. Also adding to this, the mortality rate in the state is high which is as a result of the climatic condition and the state of living in the area. There are young ladies who are in dire need of health intervention due to genital mutilation which is rampart in the area.

Translators– this is another area in which there is a high demand for, as there are plenty expatriates in the state who are working for various non-governmental organizations but cannot speak directly to the locals because of language barriers which has inevitably necessitated the need for language translators  in the area. There is a high demand for language translators in French, Hausa, and German among others.

Security– due to the various cases of insecurity in the area there is demand for security operatives by many private individuals and companies in the area.

Information Communication and Technology– Job specifications such as data analyst, communication experts, IT personnel and various other ICT designations are in high demand in the state. There are various non-governmental organization who works with data that needs processing into information and other specifics which calls for the work of IT experts to work in this area.

Real Estate– there are plenty non-indigenes who are working in Maiduguri and their first call of action whenever they get to this area is to get for themselves a very comfortable place for their accommodation, this means that you can dabble into real estate in the state where you get to find accommodation for expatriates who has come to work in the state. Also you can also sell lands to non-governmental organizations who are looking for a place to build and set-up their agencies

Others- there are other areas in Maiduguri in which there are job opportunities, areas like logistics whereby people need professional drivers to help them navigate these areas, tour guides to help them facilitate their discussions with the locals, food vendors, cleaning business is also on the high rise there as there are individuals who are very engaged with work and would have no other time to do their laundry or clean their houses.